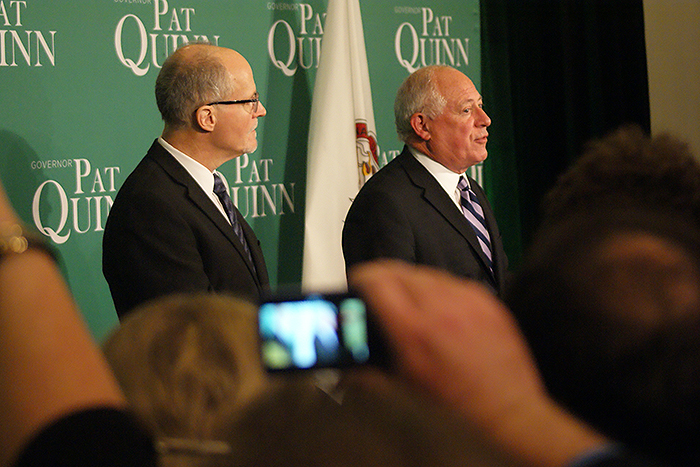 All eyes -- and lenses -- were on Gov. Quinn during his speech at the Hotel Allegro. (Photo/Erin Yarnall)

By Matt Paras and Erin Yarnall

For almost an hour, the podium in the Walnut Room at Hotel Allegro remained empty after multiple media outlets called the 2014 Illinois Gubernatorial election for Republican challenger Bruce Rauner over Gov. Pat Quinn.

The attendees in the room, which hosted Quinn’s election party, grew restless as the hour went on, muttering their signs of disappointment and quickly realizing that their man didn’t win re-election.

In just a three-minute speech, Quinn rallied the crowd with a surprise appearance.

At 12:18 a.m. on Wednesday, Quinn vowed to not concede the election until every vote was counted. Rauner led Quinn by about 4 percentage points (50.6 percent to 46.1 percent) when the race was called.

“I think the prudent thing to do on behalf of democracy in Illinois is to thank all the people who voted today,” Quinn said. “I think they exercised their fundamental right to participate in our democracy and they're entitled to make sure that the election authorities in every single county, including Chicago and Cook County, count their votes, and they're going to be counting tomorrow, and the next day, and probably the next day.

“Until that happens, I don't think we should make any judgment on the results of this election,” he said.

Saying he wanted "every vote to be counted" -- a possible reference to fraudulent robocalls from Republican offices that shut down some polling sites -- Quinn vowed to wait up to several days before conceding the race. Quinn trailed by 173,000 votes with 93 percent of the precincts reporting, but 45,000 votes had yet to be counted.

Quinn also thanked his supporters that stood by him.

“I do want to say everyone here and everyone in Illinois who voted for our side today, who worked on our campaign so hard in such an energetic way,” Quinn said. “We believe in the cause and the cause is making sure everyday people get their fair shake. This is what I’ve devoted my life to.”

The race had been extremely tight over the past few months. Quinn and Rauner engaged in three debates and have campaigned throughout the state of Illinois to try and win over voters.

Both candidates have combined to spend nearly $96 million in hopes of getting elected. Quinn, according to public records, has spent about $30 million while Rauner has spent nearly $66 million — $26 million of that coming from his own personal contributions.

Quinn supporters placed the blame on the record-setting amount of money raised throughout the campaign for Rauner’s lead.

“I’m upset because Rauner ran a very dirty campaign and that he tried to buy the campaign,” Sonia Barrios said. “This much money should not be involved in elections.”

State Sen. Kwame Raoul (D-Chicago) said that he was bothered by the “inexhaustible wealth” Rauner invested to “try and influence this election.”

“I think this state and nation really needs to explore the direction we’re going in regards money determining elections,” Raoul said. “It’s disgusting. To me, this isn’t a class battle. Wealthy people should be able to run for office — everyone should. But for the wealth to be the determining factor...”

Raoul also blasted Rauner for not having, in his opinion, a clear concrete plan to lead the state. Raoul said Rauner’s wealth was a determining factor and is still waiting to see a detailed plan.

One of the major issues addressed throughout the campaign has been minimum wage. Quinn has been open about his desire to raise the minimum wage in the state, which is currently $8.25 per hour. Rauner holds a position to only increase minimum wage under certain conditions.

Other hot button issues the candidates clashed over were proposed tax hikes, pension reform and the growth of the state. Rauner, who was endorsed by nearly all of Illinois’ major newspapers, repeatedly blasted Quinn for proposing tax increases in the 2014 budget while Quinn retaliated with saying that Rauner wants tax cuts to give him a break in his own tax bracket.

As the numbers rolled in after most polls closed at 7 p.m., Quinn led for a large portion of the night, which gathered cheers from his supporters. But the morale sank around 10 p.m. when Rauner took a 49-47 lead with 65 percent of the precincts reported.

But Quinn isn’t giving up yet.

“It’s about making sure everyone gets a fair shake,” Quinn said. “We will never, ever yield until all the votes are counted.”

This Data/Chicago project made possible by
a journalism grant from the Robert R. McCormick Foundation