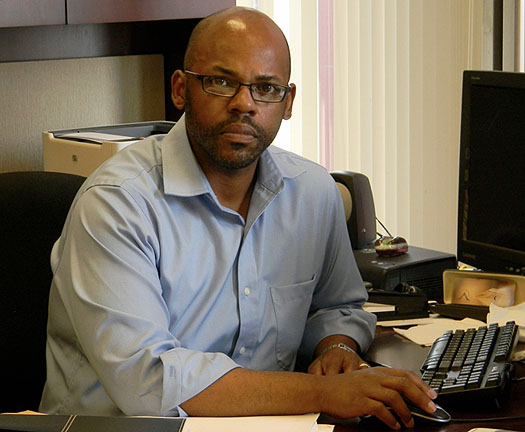 Lawrence Hamer was teaching a class on DePaul's Loop campus during the 9/11
terrorist attacks. (Photo by Rima Thompson)

Lawrence Hamer,  associate professor and associate vice president in Academic Affairs at DePaul, was on the Loop Campus to teach his early morning class on 9/11.

“There was no inclination that it was terrorism,” he said. “At the time, the news was reporting suspicions of hijacking.”

Although Hamer was aware of a plane crashing into the first tower, he did not think there was any reason for concern. Even after his class was interrupted by security alarms and evacuation instructions, he felt no sense of urgency.

While the chaos and panic of Sept. 11 has passed, Hamer, along with many interviewed, still think about campus safety and public safety differently than before. Memories linger of what happened that day.

“There is less fear when people take the time to get to know the sameness and the differences that exist between themselves and others,” Hamer said. “But, every now and then I find myself looking at how close the planes fly to the [Willis] Tower.” -- Rima Thompson