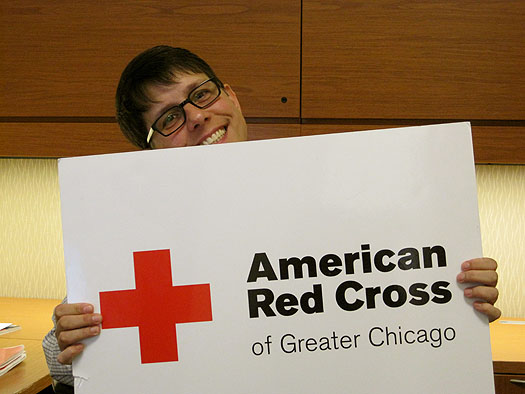 As she remembers it a decade later, an eerie silence engulfed New York City as American Red Cross volunteer Kat Hindmand drove across the Brooklyn Bridge.

Two New York firefighters, wearing full gear, sat in the back seat of the car she borrowed from her landlord. Their destination: ground zero on Sept. 11, 2001, where the World Trade Center’s twin towers had already been reduced to ash and rubble.

“It was surreal,” Hindmand said. “Every day, thousands of people drive across that bridge. That night, I was the only one on the road. Everything was covered in ash. It was like I was on a movie set. It never felt real.”

Hindmand, now 43, eventually got the firefighters to ground zero, where they could begin to help with search and recovery. She then turned around and drove back across the empty bridge, alone. The only sounds she heard were the fighter jets circling overhead, securing the city’s airspace.

“That New York buzz – cars whizzing by and honking, people rushing to get places, the chatter – it was all gone,” Hindmand said. “The city was at a standstill.”

As she drove, Hindmand thought about how she had once worked in Tower 2, had shopped in the complex at the World Trade Center, and had even had her shoes shined there. She never found out if the guys who shined those shoes made it out in time.

They were very much a part of her everyday life, as were all the people who worked in the twin towers. Hindmand said it was, and still is, very unsettling to not know what happened to them.

“As a Red Cross volunteer, you are not supposed to be impacted by the situation you are working to help people get through,” Hindmand said. “But from my apartment in Brooklyn, I watched the towers come down. I was a New Yorker. No one was left unaffected.”

Hindmand was a volunteer for the disaster mental health leadership team in the Greater New York chapter. She began working with the Red Cross in March 2000.

The disaster mental health team’s mission is simple: help victims put one foot in front of the other. In the aftermath of a disaster such as 9/11, the first thing people need is to feel safe, Hindmand said. In order to do so, they need basic, practical things: shelter, food, water, medication, clothing – and someone to talk to.

“Disasters oftentimes cause people to lose faith in humanity,” Hindmand said. “Our job is to provide immediate assistance, establish a human connection, bear witness to their experience, and empower them for the future.”

The Red Cross set up many service centers in the days following the attack. These centers provided financial assistance for those who lived below 14th Street in Lower Manhattan, acting as a one-stop-shop, since all the businesses were closed for about one week.

Catholic Charities, the Salvation Army and FEMA worked together with the Red Cross and several other agencies to provide for residents and their families. It was the first time this model was used, Hindmand said.

The shelter Hindmand worked at the day after 9/11 was for people who were trying to get home. All of the bridges and tunnels to Manhattan were closed, and public transportation shut down. So many people were stranded. The shelter provided a place to rest, food and water, as well as psychological support for first responders, victims and other Red Cross staff who were already deployed.

Respite centers were also set up near “the pit” at ground zero so that the men and women working recovery 12 to 24 hours a day could rest for a while before returning to the site.

“It was amazing, what you might find in those centers,” Hindmand said. “People donated just about everything to help these people out. La-Z-Boys, computers, beds, you name it. New Yorkers were very nice to each other for about four months after 9/11. They actually smiled at each other, and made eye contact – it was weird. It was amazing to see how they and the rest of the country came together to help.”

The shared experience of surviving the disaster did help put things into perspective for Hindmand. She remembered one 16-year-old girl in particular, who was ferried over the Hudson River to ground zero to say goodbye to her father. He was one of the 343 firefighters who died that day. His body was never recovered.

Hindmand's job was to escort the girl as she went through this grieving process. While trying to be tough at first, without tears, the girl put up a strong silent front. But as the ferry came closer to the site, the girl turned to Hindmand and said, “This really sucks.”

Hindmand agreed, and that was all it took to establish a connection with the girl, to get her to open up, and cry for the loss of her father. A simple truth, one that each New Yorker knew, was what it took for them to feel not so very much alone anymore.

She had to eventually take a break from her work, because on the emotional toll this job takes on a person. On Nov, 11, 2001, she attended a conference for mental health professionals, to talk about what they had learned from 9/11.

On Nov. 12, American Airlines Flight 587, carrying 256 people to the Dominican Republic, crashed in Queens. Everyone aboard the plane died, along with five people on the ground. It crashed in a neighborhood where many firefighters lived with their families.

Everyone at the conference immediately went to help.

“I hit a wall,” Hindmand said. “It was too much for me. I was so impacted that I wouldn’t have been able to provide the service I should have if I continued volunteering.”

Even 10 years later, Hindmand said she still has not reconciled with what happened.

For many years, it seemed like the attack happened yesterday to Hindmand. But now, it's almost like a dream. She still reacts instantly to jets flying overhead, has flashbacks any time she sees rubble at a construction site, and she could not bring herself to see any of the movies made about 9/11.

But she said she has a new appreciation for life – for her family and for her connections to others, however cliché that statement might sound.

“It made everything else so trivial,” she said. “I’ll never forget it.”