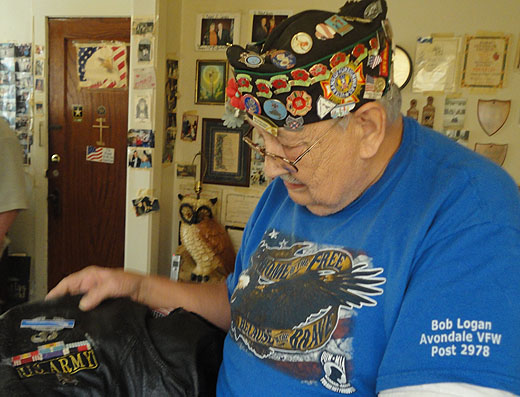 Korean War veteran Bob Jacobe said he thinks the U.S. could have been better
prepared to prevent the 9/11 attacks from happening. (Photo by Megan Fox)

When Bob Jacobe heard on the radio that two planes hijacked by terrorists crashed into the World Trade Center's twin towers in New York City, his first thought was a drastic one.

“My reaction was, well, we are under attack like Pearl Harbor," he said. "This is the beginning of World War III.”

Having served 13 years in the U.S. Army, Jacobe has experienced the highs and lows of the military. The 75-year-old veteran who served in the Army airborne division and fought in the Korean War reminisced about his time in the military from 1951 to 1964 and shared his thoughts and reactions about 9/11.

The Chicago native enlisted in the military because he wanted to serve his country. He spent three years in Korea during the war then eight years in Germany. Jacobe then came back to the states to train troops.

Nearly 10 years after the Sept. 11 attacks, Jacobe recalled that day and what happened afterward. He said he believes the U.S. could have been better prepared and should have sensed something was wrong in the months leading up to 9/11.

“These guys wanted to learn how to fly a plane and not land it?” he said. “Something should have turned a light on.”

Not only did Jacobe say there should have been a heightened sense of suspicion regarding the terrorist pilots and the plot to target the airlines, but he also thought the U.S. could have been quicker to capture Osama bin Laden.

“I think they were really slow with the uptake,” he said, referring to the terrorists and their flight training. “Personally, I think they could have gotten bin Laden a long time ago, they could have used special forces. I would have jumped right on his roof. It’s done now, there is nothing you can really do about it.”

It took more than nine years for the U.S. to capture and kill the terrorist leader and, although relieved, Jacobe said he was still unsatisfied.

“They should have got [bin Laden] a long time ago,” he said.

With troops still over overseas almost a decade later, Jacobe spoke realistically about the future of the war and what his uncertainty of when it will end.

“I don’t know when it’s going to end, but I’m sure this is not the end,” he said. “Something else is going to rise before our time is over. We put down our guard on 9/11. People forgot what happened at Pearl Harbor. We have to stay on our toes and stay alert.”

Jacobe still remains passionate about the military and proud of his past. He was awarded many honors including a Purple Heart and a Korean Presidential Unit Citation. He recalled his favorite memory of the Army -- doing jumps for the airborne division -- and about surviving the cold, hard nights in Korea.

After the military, Jacobe kept busy with raising his family. He has one daughter from a previous marriage and another daughter and a son from his wife of 39 years. His wife, Mary, died four years ago. Jacobe remembers her as a great woman and the love of his life.

Jacobe still resides in Chicago, in the Irving Park neighborhood, and continues to be involved with the military and veterans. As a volunteer at the Jesse Brown VA Medical Center on the West Side, Jacobe works five days a week, putting in 50 hours, and has devoted more than 20,000 hours in the last 19 years.

In addition to his volunteer work at the hospital, Jacobe keeps busy with fundraisers, community service, and even opens his house to homeless vets. Isaac Cox, who also volunteers at the VA, was once homeless but has lived with Jacobe for the past 18 months.

Although it’s been years since he has been an active member of the U.S. Army, Jacobe said he would go back in a heartbeat.

Jacobe also offered advice for those currently active in the service, and those who will be in the future.

“Do all you can, do the right thing,” he said. “Obey your commanders and give your heart to God. Do your best while in the military and if you can’t do the job, get out. Be a credit to your country.”