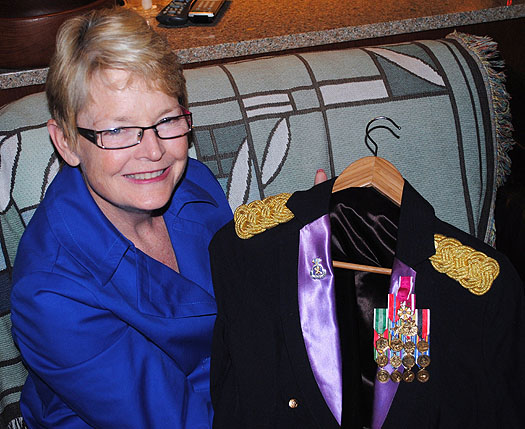 Col. (Ret.) Jill Morgenthaler with her awards jacket, which
includes the Legion of Merit award. (Photo by Ryann Rumbaugh)

On the morning of Sept. 11, 2001, Army Col. Jill Morgenthaler was on her way to work at Argonne National Laboratory when she heard about the first plane crashing into the twin towers.

When she finally arrived at her job, news of the second plane hitting the towers broke, giving her a gut feeling that this was no accident.

“I was stunned, I figured we were at war, but I couldn’t figure out who the enemy was,” said Morgenthaler, now retired from the military. “I was thinking, ‘Is it China? Is it Russia? Who’s attacking America?’ ”

Although her military reserve units were a part of a school brigade and didn’t have weapons, she put them on alert until the real reason behind the crashes was discovered.  In order to protect their facility in Darien -- about 40 minutes from Chicago --  Army and Marine troops worked together in case there were more attacks.

“We even had neighbors come by, old men from World War II, with their shotguns to protect our facilities,” she said.

From the moment she learned about the attacks, Morgenthaler, who had 25 years of military experience in 2001, including service in Bosnia, began preparing in case the military needed her reserve units.

“Every one of us trains to protect America, and it was frustrating sitting in a school brigade," she said. "So I thought we could help with logistics. If we needed medical supplies moved, if things needed to be shipped to and from O’Hare, I could volunteer the unit.”

Although none of that was necessary, war was still upon the United States. Morgenthaler recalled being nervous about the possibility of Chicago being attacked as she drove home from work that day.

“Even on a clear day on I-55, you can see the Sears [Willis] Tower,” she said, “and I kept looking for a plane to attack the Sears Tower.”

The entire nation watched the terrorist attacks 9/11 on television for several hours. Yet, Morgenthaler understood how images of horrific attacks can stick in someone’s mind, especially a child’s. She lives in Des Plaines with her husband, Kerry Chambers, and two children, Neal, now 22, and Jamie, 19.

“For my children, I let them watch [the attacks] just once, and I said ‘OK, no more’.  I didn’t want those images, over and over, burn into their brains,” Morgenthaler said. “I was just stunned by the evilness of the whole thing.”

In 2004, Morgenthaler learned that she would be deployed to Iraq to oversee strategic communications for TV, radio and newspaper media.Hearing this news was hard, but breaking it to her two teenage children was even harder.

“It kind of reminded me of when my father went to Vietnam, because I asked him why he was going, and he wasn’t sure,” Morgenthaler said. “And here I was, off to Iraq knowing this wasn’t the right enemy. It’s the terrorists, it’s not the nation.”

During her 10 months in Iraq, terrorists were coming into the country to attack the international forces. The Iraqi military was already defeated, but terrorists and insurgents were attacking U.S. troops and trying to prevent democracy from gaining a stronghold.

One of Morgenthaler’s many responsibilities in Iraq was handling press duties for the Army.  She addressed the Abu Ghraib scandal and was also present at Saddam Hussein’s first hearing.

“We came under a lot of attacks -- a lot of car bombs and mortars within our compound,” she said. “We were in our convoys and we were still in a lot of danger. But at that time in 2004, there were still a lot of people who were so happy we were there.”

After arriving back in Illinois in October 2004, Morgenthaler was appointed Illinois Deputy Chief of Staff for Public Safety and Illinois Homeland Security Adviser by former Gov. Rod Blagojevich. She now dedicates her time to researching and developing emergency plans for the government and businesses.

“I am probably more aware of some of the terrorist activity within our nation, but there are assumptions that even though I’m retired, that I have a secret source [of information] out there, and I don’t,” she said. “I only know what we watch on the news.”

Morgenthaler ran as the Democratic nominee for Illinois’ 6th congressional district in 2008, but was defeated by Republican candidate Peter Roskam. She has won numerous awards, such as the Legion of Merit, Bronze Star and the Humanitarian Service Award for her time spent helping refugees in Kosovo.

Although it has been many years since Morgenthaler was overseas, she said she still does not believe the U.S. is back to normal after 9/11.

She stressed the fact that Americans are all targets to those who don’t share our freedoms and that “people will do anything to hurt us.”