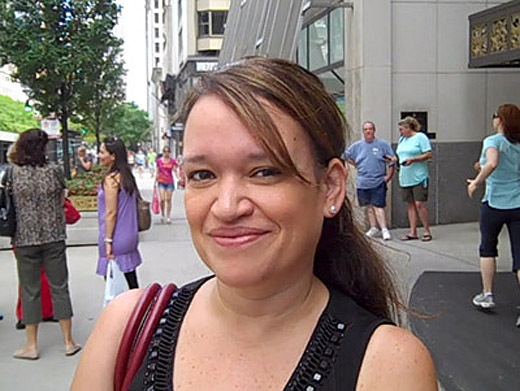 The morning of Sept. 11, 2001 started out just as any other for Margaret Ramirez.

Having only just returned from a vacation with her husband, Ramirez woke up to a gorgeous day in New York City. She and her husband left their apartment in great moods, ready to enjoy a beautiful Tuesday.

As she left the third-floor Brownstone apartment, Ramirez’s landlord stopped her and beckoned her into his first-floor abode.

“Did you hear what happened?” her landlord asked. “The World Trade Center is on fire.”

It was a rare day that neither Ramirez nor her husband had watched TV or glanced at a newspaper. Ramirez was a Newsday reporter for the Queens bureau at the time and her husband was a writer for Bloomberg News.

“As soon as we caught sight of the flaming tower on the television,” Ramirez recalled, “my [husband] and I looked at each other and said ‘We’ve both got to get to work immediately.’ ”

Ramirez drove in the direction of the twin towers, hoping to get as close to ground zero as possible. Heavy traffic on FDR Drive made that route nearly impossible. But that did not stop her.

“I got out of my car and started running toward the Trade Center,” Ramirez said.

She had made it as far as 42nd Street when she got a call from her editor asking her to interview New Yorkers in Midtown Manhattan about what had happened.

“They wanted voices from everywhere in the city,” she said. “The subways had just been called off, so people were just flooding out of the subways and onto the streets. [They were] crying, thinking the same as me, ‘What is going on? What is going on?’”

From Midtown, Ramirez could see the twin towers during her interviews.

“We could see the skyline of the towers with smoke streaming,” she said. “After about an hour, we all looked and they just crumbled.”

“I still shake when I think of that, all the people that worked there. I pretty much saw them all turn to ash.”

Ramirez returned to her office with interviews of several shaken and devastated New Yorkers, including a baker who had just come off a midnight shift, a family headed to Queens, and two sisters who worked at a downtown clothes shop who were looking for their other sister. She ended up staying late into the evening just to be with her coworkers.

“It was a time to bond,” Ramirez recalled. “We didn’t know what to do. Going home would have felt strange.”

In fact, some reporters slept in the office that night. Ramirez went home, and simply hugged her husband when she saw him.

“We didn’t say much,” Ramirez remembers. “There wasn’t much to say.”

In the days that followed, Ramirez wrote a variety of pieces surrounding the tragedy, including a feature on the immigrant employees who worked at a restaurant situated at the top of the World Trade Center called “Windows on the World.” She was also assigned the task of covering dozens of funerals for Newsday.

“I enjoyed paying tribute to the common people,” she said, “just caught up in this horrible situation. I was grateful that those were the stories that I got to cover.”

Ramirez experienced the 9/11 attacks in a particularly unique way. Not only was she a seasoned journalist, she was a New Yorker at heart.

“I was a New York reporter. It’s a different breed of reporter,” she said. “I think that’s why much of the reporting was so stellar – because it was all emotional reporting. People felt like this was their city. We were all writing these stories to help the city heal. There was no detachment as a reporter – we were all New York journalists.”

Through career changes, Ramirez found her way to Chicago, where she started working at the Tribune as a reporter in January 2005.

On Sept. 11, 2011, she will be a week into teaching full-time in DePaul University’s College of Communication journalism program. Although she is happy in her current situation, a part of her still yearns to be back in New York City for the 10th anniversary of the 9/11 attacks.

“My heart is still there,” she said. “I wish that I could go there and just feel … just be with all the people who are remembering their loved ones. I can’t believe it’s been 10 years. Some days I think about it and it feels like it just happened.”