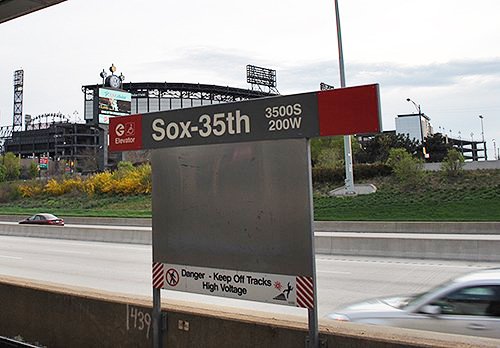 The CTA will close down the Red Line South Branch, including the Sox-35th stop, on May 19, -- a move that will affect the final 62 of the White Sox’s 81 home games.

The day after the closure begins, May 20, the Sox open a three-game series  against the Boston Red Sox at U.S. Cellular Field. On May 27 and 28, the Sox will play host to their crosstown rivals, the Cubs, in what will no longer be called the battle of the Red Line, at least for this season.

White Sox fans getting off at Sox-35th, and usually walking two blocks to get to U.S. Cellular Field, can look forward to taking the Green Line, Metra, buses or driving to games.

“The White Sox certainly plan to monitor and work with CTA as renovations get underway,” Maloney said. “But we truly expect any impact, if any, to be very minor.”

Officials say the organization is not concerned about a possible decrease in home attendance, despite the south branch of the Red Line being closed for five months. The White Sox ranked 26th in the Major Leagues in home paid attendance last season with an average of 20,892 fans (1.9 million total) in 2012, according to baseball-reference.com.

Sox fan Anthony Cushion, who lives on the North Side and uses the Red Line to travel to games, will be one of the many affected by the shutdown. He admitted that it is going to be an inconvenience for him.

Despite the challenges, the Red Line closures will not stop Cushion from going to U.S. Cellular Field this season.

“I will still go to the games because I am a die hard,” he said. “However, I will have to plan around the construction to get to the games.”

Red Line trains will continue along the Green Line elevated structure beyond the Loop. The first stop along the Green Line will be the 35th/Bronzeville/IIT station, which is located more than three blocks from the ballpark in the middle of the IIT campus, Maloney said.

“That would be two additional blocks from what Red Line riders are accustomed to when walking to Sox games,” Maloney said. “Currently, there are no plans for shuttle service from the Green Line station to the ballpark for those extra two blocks.”

Sox fans used to taking the Red Line to 35th Street will simply have to walk the extra few blocks from the Green Line stop at the Illinois Institute of Technology. Sox fans can also opt to take a Metra Rock Island Line train to the 35th Street station from downtown.

But the inconvenience doesn't sit well with Cushion, who expressed his displeasure with taking another CTA route to get to the ballpark.

“I also don’t feel like walking from a farther distance because I have to take the Green Line,” he said.

According to an analysis conducted by the Chicago Tribune RedEye, the Red Line South closing will have more of an effect on South Side fans than on North Side fans.

A South Side fan who usually takes the Red Line from south of Garfield Boulevard to the game can take a CTA shuttle bus to the Garfield Green Line for no charge. However, the trip is longer and takes more time.

RedEye also clocked the time it takes to get from the Garfield Green Line stop to the 35th-Bronzeville-IIT Green Line station near U.S. Cellular Field at 11 minutes, 26 seconds.

That is about five minutes more than it takes to go from the Garfield stop to the Sox-35th stop along the Red Line. One of the reasons is there are three more stops in between Garfield and 35th Street on the Green Line compared to the Red Line.

On the opposite end, North Side Sox fans will have a much easier time getting to games. Train travel is about three minutes faster going from State and Lake on the Green Line than by the Red Line, according to RedEye calculations.

The reason: There's one fewer stop on the Green Line than the Red Line.

The other means of public transportation included in the RedEye’s analysis was the Metra.

However, the Metra trains do not run as often as Green Line trains, and fares are more expensive. A one-way ticket from downtown to 35th Street is $2.75, while a ticket from 35th Street to the 95th Street station in Beverly is $4.25. That is nearly double the cost of a one-way CTA rail ticket.

With all the talk of public transportation, Sox fans can avoid all the different reroutes and drive to the games instead. U.S. Cellular Field includes multiple parking lots and because of the circumstances this season the White Sox organization is adding a little incentive for those who do drive.

“We have reduced parking to $20 [per game] for this entire season, with parking for only $10 on Family Sundays,” Maloney said.