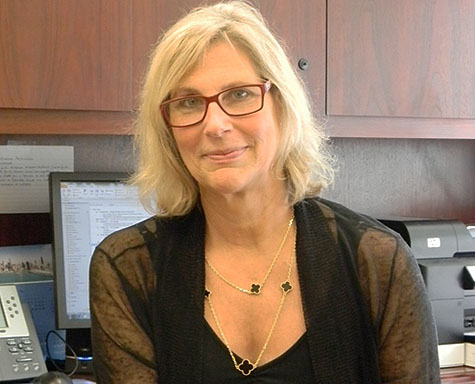 DePaul's Barbara Schaffer said the university is working
to move beyond 9/11. (Photo by Rima Thompson)

Barbara Schaffer, DePaul's assistant vice president in the Office of Institutional Diversity and Equity, said she was worried about her daughter, Emily, and then son-in-law, Pierre Loic Assayag, who were living in New York on 9/11.

“My son-in-law was working in the World Trade Center, and for 45 [panicked] minutes my daughter and I frantically tried to reach him,” Schaffer said.

As it turned out, her now former son-in-law was late to work that day and transportation officials had stopped the train he was on one station before reaching the trade center.

Schaffer’s panic did not completely subside. Her youngest daughter, Kate, was scheduled to fly on Sept. 12 to start graduate school in Scotland. Luckily for Schaffer, all flights were canceled following the attacks. When flights resumed, Schaffer escorted her daughter to Scotland.

“I don’t know if my fears were motivated by her leaving or of her going on the plane,” Schaffer said. “At the time, I wanted to have all my loved ones around me.” -- Rima Thompson