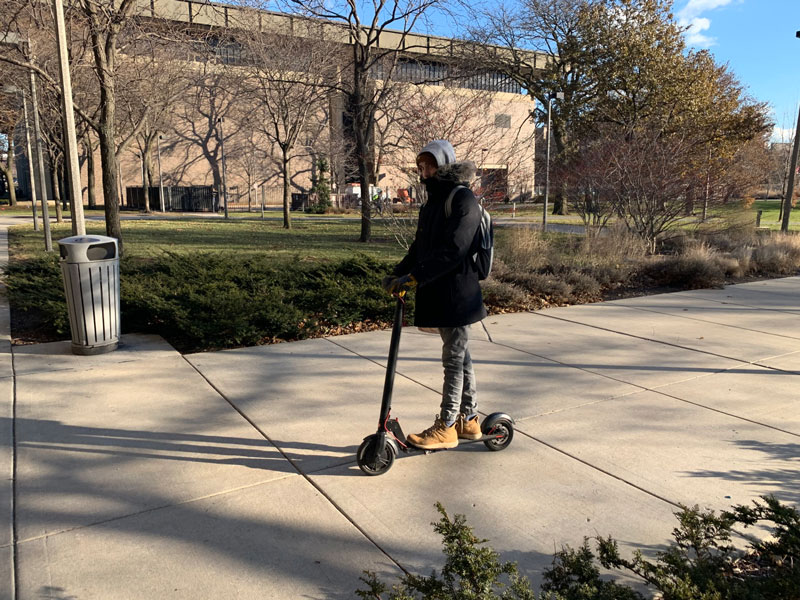 By Tom Ackerman an Nick Vranas

Whether Chicagoans hope to see more of the nimble, two-wheeled electric scooters or not, consumer trends are shifting in the city.

And for some, electric vehicles are not just a new way of traveling but they are a way of blowing off steam.

“It’s a single, personal vehicle compared to having to wait for the bus station or wait another five minutes and to wait for every stop before you get off,” said Josh Villacastin, a sophomore computer science major at the University of Illinois at Chicago. “You’re just cramped up with everyone. But with your own vehicle, you’re free to do anything. You can ride wherever you want.”

Villacastin is a member of multiple electric vehicle riding groups, such as the Chicago Onewheel group and Boosted Board Riders Chicago. Membership for the groups are near 1,000 people each and the group meets have drawn up to 40 or 50 riders at a time in warmer weather, he said.

Onewheel refers to a single wheel that a rider balances upon, with a small space for each foot around the wheel. A boosted board is an electric skateboard.

Villacastin said he has mixed feelings about the possibility of a more permanent program coming to the city, since a four-month pilot program for rental scooters was implemented in June and halted in October.

City officials now are trying to determine whether a permanent program is practical on a number of fronts, as mass-transit options show low ridership and concerns loom for affordable and accessible transit.

“It’s a good thing that we’re making transportation more accessible, so it helps college students and anyone who’s looking to get a cheaper alternative to Uber, where it’s like 20, 30 bucks to get a ride that’s pretty short,” he said. “A lot of us enjoy it when it’s used properly, but we hate it when we see these scooters in the middle of the sidewalk. People aren’t taking care of where they’re actually supposed to be kept.”

Certain areas of the city have a great need for such convenient transportation, although the scooter and other e-vehicles require physical balance and also maturity to ride it, in addition to the fact that it is designed for and mandated for one person to ride it at a time, according to the renting companies.

Villacastin can relate to a need for accessible transportation when he commutes to his western suburb. He rides eight miles to his home from the metra station, and he would have to walk if he didn’t own the e-vehicle, due to a lack of available parking spaces, he said.

“In terms of accessibility, there’s a lot to come. I never thought this would be a thing. A scooter without handlebars? Who in their right mind would make something like that?” he said while speaking about new technologies including options like treaded and spiked tires that make it possible to ride during the winter. 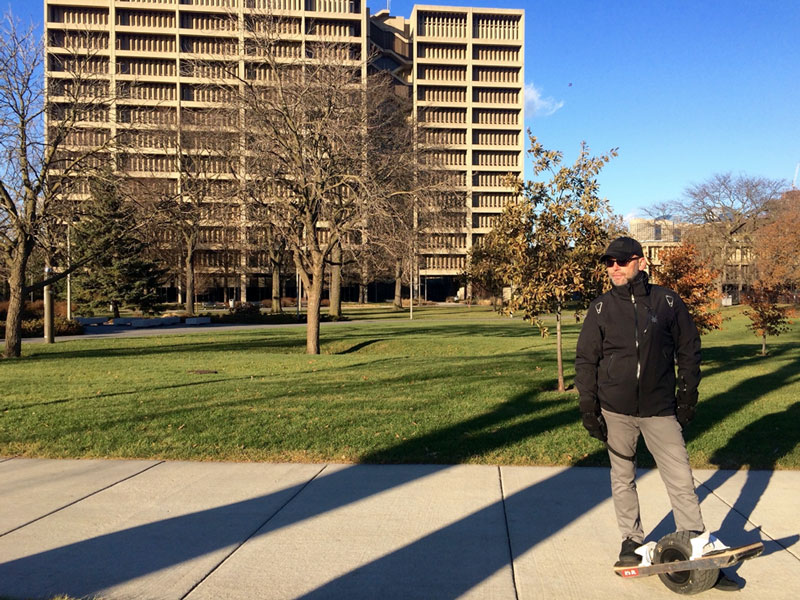 Matthew Caston is a member of the One Wheel Chicago ride group, shown near UIC campus. Video of Caston (Photo/Thomas Ackerman)

While e-vehicles are becoming increasingly popular, though, there have been instances of injury and even deaths nationwide.

Ben Polony, a junior public policy major at UIC, fractured a finger in August after hitting a curb while riding a rentable e-scooter.

“I definitely want to see the program continue,” he said. “My accident and injury was my own fault because I wasn’t paying attention to the street and the road in front of me.”

Polony had been riding e-scooters before the program came to Chicago and said he became too comfortable on the vehicle that requires full attention.

Polony lives a short distance from UIC in a part of the Little Italy neighborhood but he appreciated the program because public transit options like buses do not always operate when he needs to travel to school or elsewhere.

“[Scooters] tend to be very useful in getting between my apartment and campus when there’s no bus that’s coming anytime soon or during the weekends; when the 157 — which is the bus that goes down Taylor street — doesn’t operate,” he said.

Villacastin added that “these aren’t toys. There should be a way to implement helmets, but I’m not sure how.” He said that as a new technology, pedestrians and drivers are simply not yet accustomed to maneuvering around scooters. Rentable scooters may have governors that restrict speeds while private scooters may have greater ability to speed.

In Chicago, 10 companies had introduced 2,500 scooters within 50 square miles that was roughly bordered by Irving Park Road on the north, the South Branch of the Chicago River on the south, the city’s western border and Halsted Street. The companies included Bird, Bolt, gruv, Jump, Lime, Lyft, Sherpa, Spin, VeoRide and Wheels.

The city will determine whether to implement another pilot program or a more permanent installment, with advocates and reports helping to weigh-in on sides of the debate; citing safety, traffic congestion, and accessibility, and environmental concerns among other factors.

“There is this perception that Chicago is a city that’s on the move, and incredibly successful by world standards,” said Joseph Schwieterman, a professor in the School of Public Service, Department of Public Policy and Sustainable Urban Development programs at DePaul University.

“But there’s also a sense that Chicago has an aging transportation system and neighborhoods that need a shot in the arm, and trying these pilots can bring a sense that new conveniences are coming.”

While the city hasn’t released data obtained from the pilot program, Schwieterman and other authors at DePaul’s Chaddick Institute for Metropolitan Development tracked scooters throughout the day with dynamic images to observe where the devices concentrated at varying times.

More than college students are taking advantage of the scooter program, which came as a surprise to Schwieterman.

“At first thought it’s common novelty, people are going to use it for recreation, visually experiencing the city. But we look at the data and it shows a lot of commuting use. You got a big peak around 7 [am] to 9 am and then one later around 5 [p.m.] to 7 p.m. It appears a lot of people are dropping off scooters right at Halsted where the pilot ends and then maybe walking the rest of the way to the Loop.”

In addition to areas close to downtown, the pilot program offered “priority zones” that encompassed some lower-income areas and those that lack efficient transit.

“The scooter companies did a pretty good job spreading these things out into poorer neighborhoods, and that’s a good sign,” said Schwieterman. “It might give the city ammunition to have a second pilot.”

Consumers also willingly engaged with often several apps to aid in the convenience of a scooter that was found, which interested Schwieterman.

“Consumers had no problem downloading four to five apps for different scooter companies," he said. "Secondly, we saw that they would use the scooters a little bit longer than we expected. Our sense was after about a mile, mile and a quarter, that thing gets expensive and it gets hard to balance your weight for that long. But people were hopping on these for long periods."