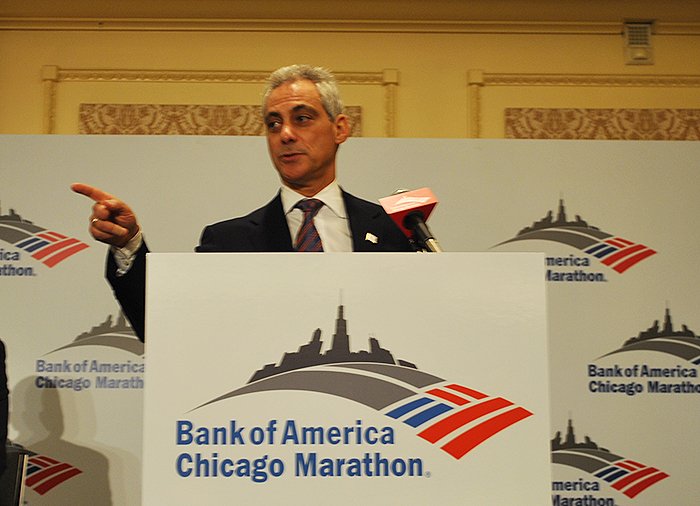 As the 36th Chicago Marathon approaches this weekend, city and race officials are focusing on security with several race-day changes after the terrorist attacks last April at the Boston Marathon.

Both race director Carey Pinkowski and Mayor Rahm Emanuel mentioned the impact Boston had in planning this year’s event at Thursday’s kickoff press conference at the Chicago Hilton,

But Emanuel and Pinkowski, who refused to answer media questions after the press conference, focused attention on how the city come together and enjoy the 45,000 runners who will pass through 29 neighborhoods on Sunday morning.

“The heartbreaking events left a lasting impression on all of us,” Pinkowski said. “But it was evident to me and our organization to how strong, how determined and how united the running community is, and together we move forward.”

Chicago Police Superintendent Garry McCarthy said at a news conference this week that uniformed and plainclothes officers will monitor the race from the ground and through security cameras, and bomb-sniffing dogs will be working crowds along the route. McCarthy also sent Chicago officers to Boston to consult with police about marathon security.

The new security procedures being enforced for the race on Sunday will have an affect on both the runners and the mass crowds who will descend upon the city to watch and cheer along the way.

All 45,000 runners were notified they cannot bring backpacks or other bags to the marathon route and must use a clear plastic bag to carry belongings, race officials said. Runners must also pick up their race bibs in person and have proper identification.

Spectators cannot enter the race route, and the city has set up barricades along the route to keep crowds on the sidewalks. In past races, friends would often join runners on the course to help them through stretches of the race, but that will not be the case this year. Bleachers will also be available at the start and finish lines, but only ticketed fans can sit there.

Emanuel thanked involved in the process and praised the work of those who have made the Chicago Marathon such a success.

He stressed the significance of runners passing through the different neighborhoods and why Chicago is the perfect host for such an event.

He also talked about how Boston will serve as a reminder on how people can unite to build a stronger community, not only in Chicago, but the rest of the world.

“This is a great event,” Emanuel said. “Let’s go enjoy it as one city, one set of runners, one country, one world, who enjoy to watch the human spirit conquer.”

Burt, 65, an Antioch native, is part of an exclusive group of runners who have run in every Chicago Marathon since its inaugural year in 1977.

Despite what took place in Boston last spring, Burt said he has no concerns and that he is only focused on his three goals for the marathon.

Burt is completely aware of the heightened security that will be in place on race day and, even though he understands the reasons, he hopes it is not too much of a distraction.

“My concern there is on marathon morning that it doesn’t get in the way of doing some of my normal preparation in anticipation of the start of the marathon,” Burt said.

When asked about the security of his family, who will be in crowds cheering him on, Burt said he believes the officials will do an equal job of trying to ensure the safety of nearly 2 million spectators, including his family as well.

“We’ve got crowds all over,” he said “I believe that these guys are doing as much as humanly possible to protect everyone.”

Economic impact: Pinkowski and sponsors at Thursday’s press conference also lauded the races charitable aspect. The race assists in raising millions of dollars for a variety of charitable causes while generating $243 million in annual economic impact to its host city according to a report by the University of Illinois at Urbana-Champaign's Regional Economics Applications Laboratory (R.E.A.L.).  … In advance of the race, a two-day Health & Fitness Expo will be held at McCormick Place Convention Center on Friday and Saturday. For more information about the event and how to get involved, go to ChicagoMarathon.com.

Race Day Forecast: Race officials and local forecasters say weather looks good for Sunday, with highs of 67 degrees and lows in the 50s at the start of the race. Temperatures were in the low 40s at the start of last year’s race, and several elite runners said it impacted the outcome.